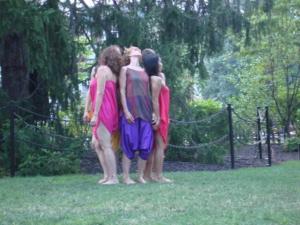 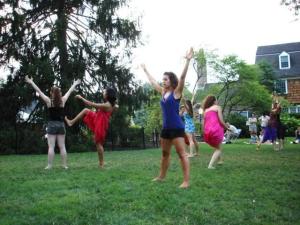 I asked for guest comments on a concert that I could not attend, Dance in the Square on Palmer Square, and J.J. Vandiver — whom I do not know — responded, to my delight. Welcome to my blog, Josh, and thank you. Anyone may comment — anonymously if you wish. Above, photos of “Homelands” by Eri Milrod. Below, Vandiver’s account. BFF

Princeton’s Palmer Square at 7 p.m. on a summer Friday night is normally the site only of couples wandering after their dinner or stop by a local dessert parlor. July 16 was rather different. The center of the lawn, in front of the giant evergreen, was roped off and a large crowd gathered at its edges.

The event: Dancers in the Square.

Nine pieces were presented and the event concluded with a salsa mini-lesson by Henri Velandia. This post will focus on three: the first piece by Christine Colosimo, Untitled White, and the two central pieces, Songs of Nilad and Homelands, by Marie Alonzo Snyder. Since I am trained in neither dance nor choreography, these are simply the impressions of an interested observer.

Untitled White: Colosimo’s piece starts with a striking image: a huge white sheet, several dozen square yards, laid flat on the grass. Gaping holes in the sheet, about a foot each in diameter, at intervals allow glimpses through to the green. The eyes of the audience seem to ask: What will this thing be used for, or is it perhaps the stage? Five women, dressed in white, move to stand at the edges of the piece. One lifts a corner high over her head and brings it down forcefully, her back and legs striating with effort. Air is now trapped under the sheet, a billow which rushes to the other side to escape. As it does, it brushes the faces of children sitting at the front.

All the dancers now lift the piece. A wailing horn, peaceful, vaguely native American, plays over the loudspeaker. The women suddenly dive underneath the massive sheet and disappear from view.

Movement occurs beneath the white cloth. It billows now with bodies rather than air.
Body parts, ‘gnarled hands’ as one observer put it, begin sticking out of the holes in the sheet. The rest of each body, still masked by the sheet, moves in unidentifiable ways. Elbows, shoulders, and then heads, work their way out of each hole. Torsos emerge. Each dancer works her way through a hole until each hole is fitted around a dancer’s waist. The sheet seems to have become a massive dress, linking in a single gown multiple ‘brides’. Not all white dresses are bridal dresses, however, and in this case there seems to be no groom(s).

What links these dancers? What does the sheet represent? Soon the dancers have wormed their way entirely through each hole. They are back on top of the sheet, which now is manipulated in various ways. They begin to drag the sheet off the green even as one dancer remains lying on top of it.

Silence. The dancers return to the green and reassemble, the sheet in a circle 10 feet in diameter, the women lying underneath it with their heads revealed. Drums, rapid, threatening. Periodically, a dancer bolts upright into a sitting position and twists her torso to face outside the circle in alarm, like frightened deer taking turns searching for a predator.

The dancers spring about the green in alarm. The drums grow more rapid. The piece ends with the women lined up, standing on the sheet, hands caressing their legs and torsos. There is a final, sharp, burst from the loudspeakers as the drums crescendo: shouting voices, rather tribal-like, of men.

Songs of Nilad: Snyder’s introduces her piece as choreographed to the music of Joseph Cysner, a member
of the Jewish Diaspora in Manila during WWII. The music and the piece are meant to commemorate friendship.

Cysner’s music starts, slow, a piano. Danielle Mondi and Henri Velandia enter the space with Velandia. He takes a long and deep step forward. Mondi comes alongside him. They meet briefly, and for a moment the movement of each is a mirror image of the other. Another long, deep step forward. For another moment, equally brief, they face. Hands raise to touch, only just, the face of the other.

They part, backing away. Mondi arches backward as if in anguish, hands now to her face. She moves to the center of the green, Velandia turning, proceeding slowly to stand to one side. Mondi’s movement, confined to the center of the space, is searching, grasping outward. The movement becomes more hurried. Abruptly, she stops. The piano falls silent. Her hands rise and reach out to touch a face, a face which is there only in being absent. The hands turn inward, moving as if to touch her own face. They do not. They fall in resignation to her side, clenching into fists.

The piano resumes, the movement resumes, equally searching. Mondi ends down on the grass, crawling backward. She stops, begins to stand, and the music changes. The music now is harsh, shrill, unsettling, not piano but new and unguessed instruments. Velandia enters the scene, pausing occasionally. Mondi’s movement, now resumed, is also intermittent. Hands occasionally rise, never as high as the shoulder, reaching out, but never towards the other.

The music becomes melodic again, horn and string. Both begin to dance, their movement more bold, and encompassing more of the space, than before. At times they seem to respond to each other, even synchronizing briefly, but at others they are independent. Finally, Velandia approaches and, tentatively, their movement begins to match, to mirror, and then transitions to partnering. They, and the music, are unhurried, soothed and soothing.

The piece ends with them side-by-side, his arm around her shoulder, hers around his waist, faces facing each other and both taking a long, deep step in unison.

Homelands: Alonzo Snyder’s introduces her second piece as an interactive one meant to elicit audience participation. The audience is invited to join in and imitate the ‘simple movement’ of the dancers, ‘to see the piece from a different vantage point’ with the stipulation that, if they join, they must stick with the piece to the end.

The music throughout is symphonic, with the addition of drums and an occasional, unintelligible, male vocal seemingly of south Asian provenance. The piece begins with five female dancers, of which Alonzo Snyder is one, standing and leaning into one another, their heads and shoulders touching.

When the vocal begins they break out of this formation, forcefully taking several steps outward.

They then freeze with arms outstretched. They hold this for several moments, then reunite in their original formation, now with arms held high. One of the dancers moves as if to break from the formation. The others attempt to hold her back, grasping her trailing leg, six arms acting as restraint. She is pulled back into the fold.
Another seems to try to break free from the formation, only to be held back by her trailing arm. Then all five dancers attempt to free themselves from the others, all linked however at a central point where their five hands meet. One finally breaks free, then the rest.

The dancers move to occupy all the space with bold, outwardly directed movement, unsynchronized.

Suddenly four young women from the audience dart into the space, moving to block four of the dancers. Upon blocking, the young women then stand still, arms raised, treelike, turned now from obstacles into props, structural elements around which the dancers flow.
The four young interlopers move from their frozen position to assemble in a line, linked hand to hand, each with a wide stance, three facing one direction, the fourth facing opposite. The dancers take to this new structural element, which seems to function as a barrier of variable permeability, and interact with it in various ways. Sometimes they probe the spaces between the dancers, briefly and sharply poking an arm through in an exploratory fashion. Sometimes they plunge through the spaces. One wiggles her way backwards, on her backside, through the legs of the barrier.

The task of description is always interpretive. Writing is forced to select among thousands of moments in a piece, each a subtle combination of music, space, comportment, expression and movement, to highlight only a handful. Not even a video, one-dimensional as it is, can capture the experience of viewing a piece in person. And, as Alonzo Snyder’s introduction to Homelands suggests, to experience a piece as a participant qualitatively changes the act of observation yet again.

Ultimately, no one in the audience leapt in to join Homelands. Perhaps more encouragement, or some indication of when they should do so, would be helpful. And one is uncertain of the reference of the title. The music, and the dress of the dancers, suggests south Asia. But why that homeland, if indeed that is the intended reference?

Song of Nilad is a beautiful piece at every level, including the music, and while the relation between the two dancers is sensitive and evocative, heartfelt even, it is utterly free of eroticism.

Colosimo’s piece has the startling effect of staying in the mind long after it is finished. The sheet, as it changes shape and moves around the space, renders the movement of the dancers concrete. To remember what the sheet was doing at a particular moment is to remember what the dancers were doing. Perhaps this is an insight into that most mysterious thing—at least to me—the mind of the choreographer. How does one structure a piece, so complicated when several bodies are put into movement together for several minutes, in the mind? Perhaps, to choreographers, each dancer is linked to the others by a plane which is manipulated in three dimensions, a massive sheet to be lifted,
twisted, pulled and penetrated.

The act of describing a piece to someone else, whether in speech or writing, changes how we relate to it. Just as when we attempt to draw an object that we see, small details emerge, connections become apparent, that a more passive viewing had missed. Only the choreographer knows, however, if those are the most significant details.

Lesson one: next time, go in person to see the performances.

Lesson two: if they let you join in the dance, do it.

1 thought on “Guest Comment: J.J. Vandiver on Dancers in the Square”