Something sudden swept over her? That phrase is from the title of Susan Tenney’s new collaboration with her brothers, a work that premieres in New York on June 5. But it wasn’t sudden. She’s done marvelous Tenney and Company collaborations for years. And she is crowd-funding the production on the Web, as is entrepreneurial actor/singer/composer Scott Langdon.

Steven Mark Tenney wrote the script for Something Sudden Swept Ov3r Me (and the 3 is not a typo) with a plot that goes like this: Norbit Ufowatchin is a graduate student about to leave the field of Advanced Alien Artifacts, assume a prestigious residency, and write The Novel of His Life, when his professor entrusts him with a powerful device capable of changing planetary history. Who is the professor really, and who is his beautiful daughter?

It runs at varying times, a,Planet Connection production, from June 5 to June 16 at the Robert Moss, 440 Lafayette Street. Another brother, David Tenney, has provided music. Susan Tenney is raising money for the production through the New York Live Arts website. 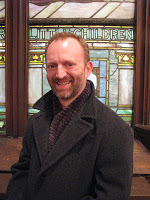 In contrast, Langdon is looking to the far future for his productions, because currently he is in “Mame” at the Bucks County Playhouse with Andrea McArdle.  Some of his projects are faith-based, such as the wonderful one-man versions of “All Eyes on the Cross” and “According to Mark.” Some are secular, like a one-man version of Charles Dickens “A Christmas Carol” that he toured to wide acclaim.

For what he calls the Scott Langdon Project, he aims to “crowd fund” through Indiegogo. His goal: “to enrich the lives of all people, everywhere, by presenting audiences with transformative performing arts pieces through which people are challenged to see the world, and their role in it, in new and exciting ways”
Potential contributions start at $10 and $25 (for which you get an old-fashioned, paper mailed thank you note plus a CD of the Dickens evening.)
Support your local artists and you get it back in delight. As my father used to say, quoting Deuteronomy 25, Muzzle not the ox that treadeth out the grain. Just because actors and dancers love their work, they still need to be paid.