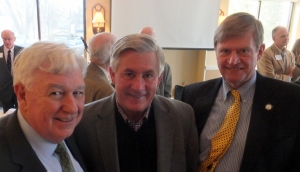 speaker says what they said to a U.S. 1 reporter as published in the previous issue. Not so this time. Diccon Hyatt’s interview with John Springrose was way different from his talk at the Princeton Regional Chamber breakfast this morning. Springrose’s company (formerly inDimension3, now Philadelphia-based Koine) pioneers in 3D printers, more aptly named “rapid prototyping machines.”

An IBM-er turned investment banker, Springrose  began with a “then and now” show of how innovation increases productivity, even though jobs are lost along the way. For instance, IBM’s first middle market computer, System 32, cost $40,000 and had only 5k of memory but in 1975 it could replace accounting functions. Checkers were replaced by self checkout and scans, tellers by ATMs, German auto workers by robots, and so on. “Innovation does lead to productivity,” he tells students, “and it forces us to think.” Be an innovator or run the risk of losing your job.

Examples of how a rapid prototyping machine can work: High school student gets an idea for jazzing up the wine drinking experience. Prints a prototype of a new wine holder, gets it manufactured in China, sells several hundred units on ebay for $40 each, total cost of each unit $1.89, accomplished this in less than a month. Product: a wine bottle holder that is lit from underneath, sending colors through a bottle of white wine. Cool. True story.

A plant “goes down” for lack of a part? A 3-D printer could make that part in a snap. A corporation could have a rapid prototype machine in the lobby and greet clients is greeted with a logo or miniature product from their company. Now that’s hospitality.

Three-D printers like toys can cost as little as $700 but, to be reliable, one should cost at least $5,000 for business use. Customers are mostly overseas. Springrose worries that the U.S. is getting left behind.

In addition to plastic, products can be in wood, metal — “anything that will melt.’ His industry today is where IBM’s System 32 computer was in 1975. “You give me the industry, I give you the use,” he offered.  “Prototype your imagination,” he challenges. “If you think about it, you can do it.”

As for the difference between the interview and the talk — the reporter dug into the not-so-successful early stage of Springrose’s company, when it was making cheap printers that were not reliable and got scathing online reviews. That’s why Springrose moved to the high end. More than 700 startups make 3 D printers but just three– including Koine — are working on business-quality tools.

Springrose has a very personal interest in the medical applications for his devices. He looks forward to the day when a rapid prototyping machine can print out a liver or a kidney. That’s because he has lived through a liver transplant. But printable organs won’t happen any time soon. Springrose came without a demo machine because — the day before, he demoed to doctors at Jefferson — and they broke the machine.