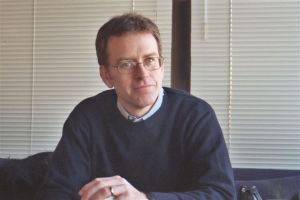 It’s Thanksgiving morning, and as I wake up, from dreams about what spices to put in the stuffing, I hear the consecutive headlines from my NPR station in Philadelphia: Door to door shootings targeting wealthy Americans in Mumbai and balloons and bands in the Thanksgiving Day parade, a surreal juxtaposition, the top two stories of the day, delivered in the same matter-of-fact newsman voice.

Wince, my previously okay back goes into stress-mode pain.

Resentment – how can that station make those two topics almost equal, one right after the other? They wouldn’t do that if the terror were in Philadelphia.

Reason kicks in. Of course not, because the parade would have been canceled. The terror is overseas, remember? What makes it different from all the other attacks and suicide bombings is the scale, and what makes it different from other large scale attacks, like the trains in Madrid, is the focus on Americans and British civilians. Yesterday my husband and I personalized the news, thinking about his colleague who will travel to that city next month, and about the family of Gupta, the student from Bombay (yes, it was that long ago, when it was still called Bombay) whom we added to our family Christmas celebration in Pittsburgh.

Bad things happening far away bring one degree of pain, but the pain ratchets up when you have a friend there. (Are we, in Princeton, taking full advantage of the opportunities we have to achieve world peace by befriending the thousands of overseas visitors that spend time here every year?)

Still, I resent the “both things are equal, both things are OK” tone of the Philadelphia announcer. Then Steve Inskeep, the national newsguy in DC (pictured above) comes on, with the same news. My news nose kicks in. I met this guy once. How will he handle this?

Inskeep starts off with an advantage over the local announcer. Because the headline summary is over, he can put all his focus on Mumbai, and he matches his voice to the story, his voice filled with concern. Then he unpacks the story, adding details. Horrible details to be sure, but knowledge is power, as they say, and the details are somehow reassuring. He drills down one layer, to the reporter on the scene, 700 foot from the Taj Mahal hotel. More details. Again, knowing more helps. Then another layer, to an Indian restaurant owner who saw the shootings, and an unidentified man, apparently American, who was in the hotel lobby when the shooting began.

How can these details possibly be soothing? Maybe because, as bad as they are, they are not as bad as my worst fears.

Maybe because Inskeep tells them with the utmost empathy, giving me the assurance that he is distraught as I am about this.

Maybe because – now that I know exactly what happened, I can fashion my own scenarios. What would I do if gunmen stormed my room? Would I be brave, scared, or full of faith and ready to meet my Maker? I hope I would be all three. I guess I’d better start working on that last one.