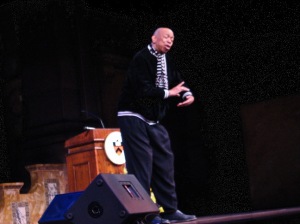 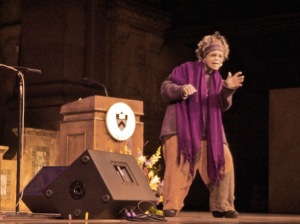 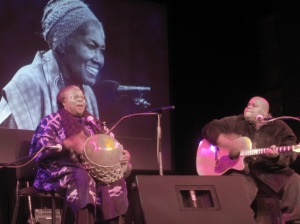 “She told us who we had been, and challenged us not to look away,” said Matthew Frye Jacobson of Odetta. Jacobson spoke at the wonderful tribute concert for “Odetta, the Queen of Folk,” at Princeton University on April 9. Jacobson, who is white, is a Yale professor working on a book, “Odetta’s Voice and Other Weapons: The Civil Rights Era as Cultural History.”

Thanks to Stephanie F. Black for these beautiful photos.

“White guilt is not what I’m talking about,” said Jacobson. “I’m talking about awareness.” With songs full of pain, telling about chapters of both white history and black history, Odetta “told us something important about who we might be.”

This rang true for me, as a group I belong to, Not in Our Town, prepares for a workshop entitled “Engaging Together to Explore White Privilege.” Perhaps this workshop can help us all to explore “who we might be.”

The first session will focus on notions of identity and privilege. The next two sessions will consider ways that white privilege hurts not only people of color, but also white people. Building on the consciousness raised and the understanding acquired, the final session will engage participants in considering how they can open their hearts to incorporate into their life’s work an active confrontation of racism.

Sources will include Unpacking the Backpack of White Privilege by Peggy McIntosh, Learning to be White by Thandeka, White Like Me by Tim Wise and the video Mirrors of Privilege.

The workshop continues Monday, April 20, and Monday, May 10 at 7:30 p.m. at Princeton Public Library. It is free, and though pre-registration at niot.princeton@gmail.com
is available, it is not required.

1 thought on “Odetta: Don’t Look Away”