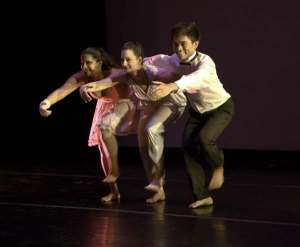 It’s difficult to make a dance fraught with emotion, and it can be even more difficult to choreograph light entertainment and do it well. Most difficult of all is to keep it simple yet give it an original twist. That’s the message I took from “I’ll Have What She’s Having,” the Princeton YWCA-sponsored concert for women choreographers over 40, at Rider’s Yvonne Theater on Saturday, March 28.

Most of the work I’ve seen by Susan Tenney, for instance, is fraught with political or philosophical meaning, but in “Thank you, thank you so much (Suite Ella):” her dancers performed to Ella Fitzgerald’s moods (shown at left). It’s as if she said, “enough gloom and doom.” The format was nightclub, as the dancers played the showbiz aspect to the hilt, lip synching. But the “construction values”(a fillip of a movement that takes it out of cliché, a hand on face penche’ arabesque turn, a change of pace that contrasts with the music) punched it up to the level of concert dance.

It’s rare when a choreographer can get inside a dancer’s skin to reveal his or her internal style, and Tenney – helped by Doug Smith’s costume designs – gave her three dancers this gift. She tapped three themes – the brassy “I’ve got-it-and-I’m going-to-show-it-to you” confidence of Kathleen Smith, the sensual elegance of Rachel Grisi, and the hidden angst of Jeffrey Rubio. Rubio can sell a song with the best of them, but in his solo, he made his way across the stage apron to “You’ve Changed.” with an intense internal focus.

Tenney had paid tribute to her late mother in last year’s concert, and this year it was Joy Vrooman Sayen who offered “Danse Pour Ma Mare,” to a song from Chants d’Auvergne by Joseph Canteloube. Though I remember seeing her choreography in the ‘80s she has been mostly teaching, not performing, since then. I was glad to see her evocative elegy, sad for the death that inspired it. Rooted to the ground, wearing layers of clothing over loose pants, she made inward, ever larger circles with her arms, cradling, then releasing out and up in suspended joy. It was more of a thoughtful aubade than a stricken lament.

Marie Alonzo Snyder premiered the heartfelt “Songs of Nilad,” using projections of archival photographs and music by Cantor Joseph Cysner. Snyder and her excellent partner, Henri Velandia, commemorated the European Jews who found sanctuary in Manila before World War II. With its three different moods, it “reads” like a mini-novel and will be especially welcomed at school and community Holocaust observances.

Loretta Di Bianca Fois’s subtle treatment of a dark topic, domestic violence, was part dialogue, part movement. As her character dithered, against a rendition of “Ave Maria,” she talked to a bunch of roses, stroking then plucking their petals and throwing them down on the floor. You realize that the flowers are a metaphor for her relationship.

Each of the “just for fun” pieces had an element that distinguished it as a concert dance versus pure showbiz.

Maxwell’s “Too Smooth,” a ballroom duet with Leland Schwantes, evoked “Dancing with the Stars,” except that Schwantes, an Ailey-trained dancer who makes his living as a hand model, retains considerable élan.

In a writhing, smoky torch solo, “Visitor,” the lithe Shari Nyce (who danced with Princeton Ballet in its early days), surprised with her edgy choices, with sensual references more familiar in less selective venues.

Christine Colosimo, the YWCA dance director, invested “July,” a three-piece suite, with the premise of someone sitting at a café in various cities.

Fara Lindsey also presented a triptych, “Learning to Wait.” In “God I Hope I Get It,” nine dancers comically mimed a Filene’s style bargain counter, did an angst filled “Please,” and finished with a top-hat chorus line, “If You Could See Me Now.” That’s the annual joy of this concert – an opportunity for dancers (and former dancers) to strut their stuff.

Next year’s program needs dancer bios. If they are indeed paid, surely they aren’t paid enough to perform without credits. Their friends and family are, after all, ticket buyers.

2 thoughts on “Looking at What They’re Having”