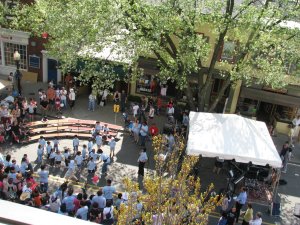 The same folks who partied at Pinot 2 Picasso last night had to get up today and put on the annual town gown celebration, Communiversity. I walked into town from our home on Cedar Lane to find the Chinese School that meets just up the street was performing on Witherspoon Street.

Everybody was having a good time in the hot sun. I met, and snapped photos of, Anne Reeves (the founder of the feast), and a bunch of other people who help people make Princeton what it is: Nancy Kieling (of Princeton Area Community Foundation and the Princeton chamber), Madolyn Greve (of Gloria Nilson and the chamber), Nancy Robin (the founder of Hands on Helpers) and the organization’s current executive director, Adrienne Rubin, and Steve Kruse, who is an activist for the bicycling cause. The Methodists were out in force — Judy and Dick Miller, Susan and David Gange (at the Stonybrook Orchid table), and the youth from Princeton United Methodist Church, who were selling baked goods for their Appalachian Service Project.

Even the Obamas were there! Well almost. See them here.

1 thought on “The Best Communiversity Yet”