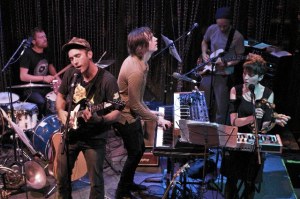 “Presence” is a slippery thing to define. Participants in Eileen Sinett’s Speaking4Biz workshop last month described it, alternatively, as a posture, a sense of confidence, an aura, an energy, a “look,” many ways of attracting approval. We agreed that celebrities – those who have been adored by the masses for a long time – accumulate a kind of electric field around themselves, so that you somehow “know” when they pass by.

But I always thought that “presence” required a regal look or at least erect posture.

Then I went with a young friend, photographer Stephanie F Black, to hear Sufjan Stevens, an eclectic singer-song writer whose folk/rock sometimes has a spiritual tinge and often has symphonic proportions. He played a small club in Philly, the first night of a two week tour with a group called Cryptacize, and no, even if I had posted this blog right away you couldn’t have gotten tickets because the tour sold out instantly; he has a cult following.

Self-effacing is not too strong a word for Stevens. His own group is a regular at big venues like the Brooklyn Academy of Music, but in the chapel at Princeton Theological Seminary last spring, he had “played in” with the Welcome Wagon, a group led by Rev. Thomas Vito Aiuto, a seminary alum who records on Stevens’ “Asthmatic Kitty” record label, and Stevens just blended in with the woodwork.

In Philly at Johnny Brenda’s, Stevens had two brass, two guitar, two keyboards, a singer, and dozens of footpedals all crammed onto the tiny stage. Stevens’ “presence” electrified the 150 screaming fans, waving and yelling for all they were worth.

He went from a deeply affecting Appalachian-style solo ballads, with banjo, to rhythmically dense blow-outs with Stravinsky-like orgiastic dissonance, all held together by an intricate and persistently driving rhythm. Stevens has a stupendous musical intelligence, and his musicians were amazing, especially the trumpet player and the drummer. I’m now a total fan.

Yet his “presence” embodied, not regal, but reticence. Far from being erect, his body was an S curve, and he had a Tony Perkins-like vulnerability.

I felt like going backstage to give him a Pilates lesson in how to stand tall. But, if “the body doesn’t lie.” as Martha Graham used to say, maybe his humble stance is part and parcel of his music, his charm. Sufjan Stevens has a presence (shall I say a quiet spirituality?) all his own.

1 thought on “Sufjan Stevens: Blessed Are the Meek”