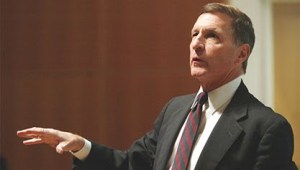 Fourteen years before Ed Zschau came to Princeton to teach high tech entrepreneurship, he told Inc. magazine interviewer Tom Richman that his heart’s desire was to run a diner in some college town, where he could serve up greasy hamburgers and talk philosophy with hirsute students.

That dream or one pretty close to it came true, except that Zschau doesn’t have to wash dishes and flip burgers. In 1997 Zschau staked out a spot at Princeton University’s EQuad to teach high tech entrepreneurship. Translated: the philosophy of business success.

Zschau (photo by Frank Wojciechowski) speaks at the Princeton Regional Chamber breakfast on Wednesday, April 21, at 7:30 a.m. at the Nassau Club on what makes universities fertile ground for business. Cost: $25 for members, $40 otherwise. Call 609-924-1776 or go to http://www.princetonchamber.org

Richman observed, “What is more likely, however, is that he will own the diner, maybe a whole chain of them, or that he will be teaching philosophy at the college, probably as head of the department. Zschau is a person — we all know one or two of them — whose biggest problem seems to be coping with an excess of success.”

How true. Zschau has had more than his share of success. At the time of the Inc. interview he was 43 years old and serving the first of two terms as Congressman from Silicon Valley. He had three majors at Princeton (math, physics, and philosophy, Class of ’61), earned an MBA and PhD at Stanford, and taught at Stanford and Harvard. He was founder and CEO of System Industries, a Silicon Valley computer products company, from 1968 to 1982,and general manager of IBM’s Storage Systems Division from 1993 to 1995.

Since Zschau came to Princeton in 1997 he has taught his one-
semester course 24 times to about 1,300 students. Each year he selects about 50 students to take it, though some years it’s as few as 35 and as many as 70. Based on the students who have contacted him to give updates, he figures that from 250-350 have pursued entrepreneurial paths.

U.S. 1 Newspaper has covered Zschau and the young companies in his stable since he arrived in Princeton, most recently concerning Princeton Power Systems. Darren Hammell, the founder of that firm, spoke for the chamber in February. Zschau says, of the ups and downs of PPS: “I never thought that the company would fail. I’d been in situations with young companies before, including the first company that I started in 1968 that became public in 1980, and I was confident, based on the talents and dedication of the team and the strength of the company’s technology and reputation with key customers, that the company would get through the knothole, survive, and succeed. They did, and they will.”

I’m not the only Zschau enthusiast in this town; they are legion. Steven Georges (serial entrepreneur, formerly with Princeton Server Group) at an Einstein’s Alley Entrepreneurial Collaborative meeting, noted that Zschau operates in an idea factory – to listen, coach, criticize. And he quoted Zschau’s favorite maxim: “Always be on a horse worth riding in a race worth winning.”

On April 23 I eliminated the original ending of this post because I learned that apparently someone else by the name of Ed Zschau started a Twitter account to oppose the Dodds bill’s restrictions on angel investment. The tweet referred to a Huffington Post article So, for the record, Ed Zschau has made no comments about the Dodds bill.