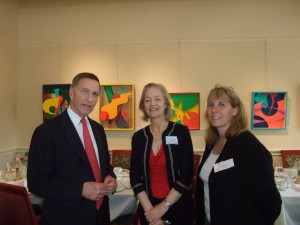 This post has been corrected from the version posted on April 21. In that version, I credited Ed Zschau with opposition to the Dodds bill, as mentioned in an earlier post. He has not gone on record to oppose the bill.

Who knew Ed Zschau could sing? I’d have given anything for a video camera when the former Silicon Valley Congressman, now a Princeton University professor, belted out his “Old Risk Capital Blues,” which he wrote and recorded in the Beach Boys studio in 1978. He burst into song halfway through a speech to the Princeton Regional Chamber at the Nassau Club this morning (April 21), a speech that touched my heart and gave me courage to “keep on keeping on” trying to make a difference in this world.

I had predicted Zschau would talk about the Dodds bill, which aims to overhaul Wall Street restrictions. Instead he told a story about how he engineered the Steiger Hansen bill in 1978, which halved the capital gains tax.

Zschau and his entrepreneurial cohorts realized that the 50 percent capital gains tax stymied investment and prevented small companies from growing big enough to pay taxes worth 30 cents on every dollar’s profit. “We were killing the goose that laid the golden egg.” At that time he was president of a powerful trade association, and he lobbied Congress until he found Wisconsin’s Congressman, William Steiger, who said “get me a bill.” Zschau not only found the lawyer to write the bill, he named the bill, wrote Steiger’s introduction speech, and found a senator (Clifford Hansen of Wyoming) to sponsor it as well. Composing and recording the song contributed to the package that senators and representatives could use to persuade their constituents to support the Steiger Hansen bill.

President Jimmy Carter opposed the bill but signed it. Result: Venture capital investment ballooned from $50 million a year to $1.1 billion in 18 months and grew to $4 billion a year. “Jobs were created. Lesson to be remembered – Selling assets is discretionary. People weren’t selling in order to avoid paying the capital gains tax. And it changed the nature of the debate from ‘who should pay’ to ‘what will be the impact on the economy.’ “

In all my coverage of Zschau for U.S. 1 Newspaper, I hadn’t dug into his political views. He revealed more of them in the Q&A; period:

*He opposes trade restrictions, even at the expense of sending jobs overseas. “Every time the government tried to restrict trade, it hurt our economy.”

*The U.S. needs to increase the percentage of jobs focused on innovation (now just four percent, a percentage not helped by the fact that many Princeton engineering students take jobs on Wall Street).

*The stimulus plan is too targeted to work well and “you don’t make money with money, you make money by coming up with technology products and services with value to customers.” But “you can’t force innovation. You’ve got to create the environment for innovation.”

Supporters hailed the Steiger/Hansen bill as how a democracy is supposed to work: Come up with solutions. Provide facts and information that indicate the impact. “Each of us, every one of us, has the capability and responsibility to play a positive role in the governance of the country. But you have to be involved,” says Zschau, who is Class of 1961 at Princeton and would have every right to put his feet up, but isn’t.

The Steiger/Hansen bill was the third story of a three-story speech that recounted the Hewlett-Packard company’s founding and values (customer service, personal and professional employee growth, contribution to the community, and of course profit making.) Some of the keys to HP success included frugality and help from university professors. (Of course academe is not always helpful. The founders of Federal Express and Nike both got bad grades on their business plans in business school.)

Zschau’s concepts are surely not lost on the 300 of his 1,300 so-far students in his high tech entrepreneurship class at Princeton who have pursued entrepreneurial paths. He has just finished his 25th class and with some colleagues has helped endow a visiting professorship for entrepreneurial experts. “We are creating a Princeton brand of entrepreneurship, an approach to life of how to make good things happen,” he said.

The take-away for me – I’m not a techie and I’m not an entrepreneur – is Zschau’s challenge: “Be an entrepreneur in whatever you choose to do. Just like Packard and Hewlett, who created something from scratch. Just like Steiger, who seized an idea, take an idea and make it happen. If you live your life as an entrepreneur, you will make an impact on the world and experience the greatest satisfaction in life that a human being can experience – to see something that didn’t exist before and know that it is here now, just because of you.”

Powerful. He could have been speaking from a pulpit instead of a podium.

2 thoughts on “Zschau: Entrepreneurship is for everyone”