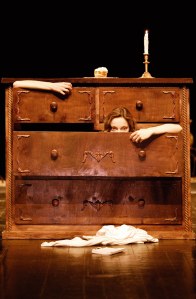 You go to the circus to be amazed.
You go to a magic show to be fooled, or to catch the fooler.
You go to a dance concert to take your imagination out for a run
You go to a play to give your emotions a workout.

So why should you see Aurelia’s Oratorio, now playing at McCarter? For three of the four. You will be amazed at the stunts and marvel at the sleight-of-body. Your imagination will have free rein. But you won’t get much chance to experience a catharsis at this 90-minute tour-de-force for Aurelia Thierree, her partner Jaime Martinez, and their backstage helpers.

I saw it on September 16, and it runs at the (smaller) Berlind Theatre through October 17. Take your kids — they’ll get it faster than you will.

It opens with her supposedly living in a chest of drawers, sticking arms and legs out of the drawers in funny ways. That’s appropriate, since she was a stage baby who probably slept in a drawer. Her grandfather was Charlie Chaplin and she toured with her parents in their Cirque Imaginaire, a surreal-like miniature circus. She and her mother, Victoria Thierree Chaplin, devised this show, which comes to McCarter from the American Repertory Theatre.

From the chest of drawers it’s one stream-of-consciousness surprise after another – anecdotes, often tossed off at a mercurial pace, sometimes long enough to be vignettes – mostly on the theme of “What if the world were upside down.” With that question taken literally, Martinez walks on his hands with a hat on his foot, looking like a woman with a very long neck. His shadow walks upright, while he mirrors it, lying on the floor. Thierree boards a sedan chair with an upside down chair and is ‘flown” by a kite that is on the floor.

In less literal depictions of an out-of-kilter world, he swings the lariat, but lassos himself and she gives a cigarette to a babe-in-arms. She goes to sleep when the alarm rings, and rescues the cat that the mouse dragged in – also at a fast pace, to music that is sometimes classical, sometimes ring-a-ding.

All this keeps me amused and wondering what will happen next, but I like it better when she dramatically interacts with some thing – often fabric – or some one, usually Martinez. Red velvet curtains that swag the stage take on a life of their own. She pops in and out of them. Windows open up. She climbs them, swings on them, and hangs limp on them. Early on, she binds herself in red, like on the prow of a boat, as the curtains swing crazily in the wind, like a ship in a storm.

Thierree and Martinez have some tour-de-force duets. In one (middle schoolers take note, it’s talent show material) they share a pair of white pants to do a solo dance. In another they tussle, presto-chango, with a black and red jacket. But best of all is when they actually dance together. My goodness, what a concept. After so much magic, so much fooling around, it’s such a relief for them to touch each other and tango together. Wow! Humans doing what humans are supposed to do!

Is there a dance comparison? Martinez used to be with David Parsons, but this is more akin to Pilobolus (though at a much faster pace) or Momix (which has the Chaplinesque feel). It’s more like a fast-paced magic show, except they’re not pulling rabbits or cards out of a hat – they’re pulling themselves out of goodness knows where. And like Cirque de Soleil, it’s very French, very stylish.

The ideas are brilliant, and the performers fabulous, but it all goes so quickly that it’s hard to discern any underlying meaning. If I were to see it again, I’d watch carefully for train references. Every once in a while she makes a train whistle noise, and she parades across the stage with building from a train set on her long train (get it?). The train theme contributes to a jaw-dropping finale.

Yet the picture I’ll remember longest involves a miniature white proscenium stage with an endless dropping curtain that keeps on reeling out fabric, changing from one white lace pattern to another, piling up on the floor. She is knitting behind this curtain when in comes a giant, menacing Balinese shadow puppet, who “eats” her foot, raveling it. She responds by “knitting” it back. Then another giant puppet picks her up by the neck like an Asian King Kong, rocking her as if she is dreaming. She escapes from the nightmare by running out from behind the white lace curtain.

For a preview of the fall theater schedule, see Simon Saltzman’s column at http://www.princetoninfo.com

If you have an opinion about a dance concert, you are welcome to post it on this blog. Send it to me by email for me to post or use the opinion space below. And check out the “Critics Corner” on the front page of U.S. 1’s website, http://www.princetoninfo.com. It’s the only media outlet that aggregates reviews and comments from a variety of sources, even its competitors.