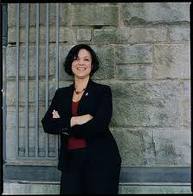 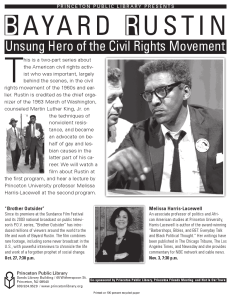 Melissa Harris-Perry (formerly Harris-Lacewell) will speak about “Bayard Rustin, Unsung Hero of the Civil Rights Movement,” at the Princeton Public Library on Wednesday, November 3, at 7:30 p.m.

Harris-Perry is Associate Professor of Politics and African American Studies at Princeton University. Harris-Perry provides expert commentary on politics, racial issues, religious questions, and gender concerns on MSNBC shows, such as the Rachel Maddow Show and Countdown with Keith Olbermann, and she writes a “Sister Citizen” column for The Nation magazine and contributes to TheNation.com.

Rustin, an openly gay black man who was raised as a Quaker, mentored Dr. Martin Luther King in non-violent tactics during the 1955 Montgomery bus boycott, and was a credited as a brilliant, visionary, charismatic civil rights activist.
The series on Rustin is co-sponsored by Princeton Friends Meeting and Not in Our Town (NIOT).

Leading up to Harris-Perry’s talk are a documentary and discussion. The acclaimed feature documentary “Brother Outsider” was shown at Princeton Public Library on October 27 and is also available for checkout. Also, one of NIOT’s “Continuing Conversations on Race on Monday, November 1, at 7:30 p.m. Delia Pitts and Ann Yasuhara will facilitate a discussion on Rustin, in particular his essay “From Protest to Politics: The Future of the Civil Rights Movement”.

More information can be found here.