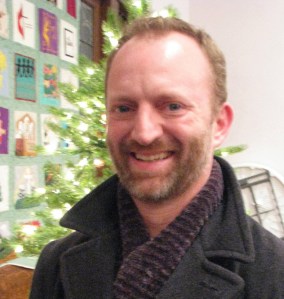 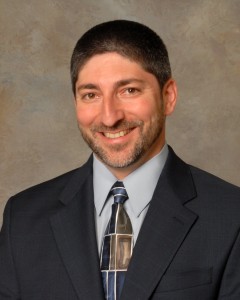 This post is about two men — actor Scott Langdon and teambuilding coach Merrick Rosenberg — and one subject — actors’ storytelling skills. Rosenberg, of Team Builders Plus (photo on left), speaks at the Princeton chamber’s breakfast on Wednesday, November 17, 8 p.m. at the Nassau Club (networking starts at 7:30).

I know Rosenberg is a fabulous communicator because I heard him at TEDxNJLibraries last spring. Here is his entertaining but useful monkey-and-banana story “the Legend of the Cold Water.” On this YouTube video, find it at minutes 10 to 15. It illustrates that the stories we tell and the questions we ask will define our workplace culture. His topic for Wednesday will be “Taking Flight! Unleash the Power of Behavioral Styles at Work and in Life” and I am sure that we will be simultaneously be entertained and enlightened.

I saw Scott Langdon (on right) in a truly wonderful performance of “The Crucible” at Playhouse 22 in East Brunswick last Sunday. It continues Friday to Sunday, November 19-21. Full disclosure #1: Scott goes to my church, and I did publicity for his one-man “Christmas Carol” performance last year. Full disclosure #2: I don’t like dark plays but I went to this one because of full disclosure #1.

Arthur Miller’s classic drama was made into a movie with Daniel Day-Lewis in the role of John Proctor. A teenage movie actress, Quinn Shepherd, plays opposite Langdon in the role of Abigail Williams.

Miller used some of the real characters in the Salem witchtrials to write this 1953 allegory about the McCarthy hearings, and he himself would be convicted of “Contempt of Congress” in 1956 for failing to identify people at meetings he attended. Many of the actors in this excellent production show a many-layered, nuanced view of their characters. In this tale of governmental power run insanely amok, the playwright and the players managed to convince me that the tragic ending was the right ending.

Langdon revealed every ounce of John Proctor’s humanity — his weaknesses and his strengths. He and the cast masterfully told Arthur Miller’s unforgettable story.