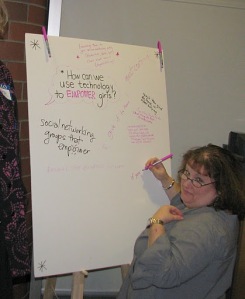 This was my second in-person TEDx experience at the Princeton Public Library. It’s not easy to explain TED, which stands for Technology, Entertainment, and Design. Imagine fabulous speakers (mostly men, actually) telling important, even life-changing ideas, and the speeches are so dynamic that they get thousands of hits on YouTube.

Chris Anderson, the curator of TED, says these powerful ideas, from some of the greatest thinkers, need to be shared.

TED talks have acquired a powerful brand, and now mini-TED conferences are licensed around the country. The Princeton Public Library hosted an all-day session last spring, engineered by Janie Hermann (show here) and earlier this month it streamed live video of a TED conference in DC that focused on women.

Of the DC-streamed talks, I was most deeply affected by Elizabeth Lindsey, a former Miss Hawai’i who is the first Polynesian explorer and the first female fellow of the National Geographic Society. She spoke movingly of how, as the elders die, we are losing the richness of our world’s cultures.

The library also had its own live speakers on the theme of Women and Technology (Twitter feed: TEDxNJLibes).

Holly Landau of Landau Leadership inspired with her tales of My Pink Pizza, workshops for Girl Scouts.

Katie DeVito shared how the group she founded, NJUnemployed, attributes some of it success to social media.

Melissa Klepacki of Princeton Scoop gave a poignant account of what it’s like to do everything in a virtual world — business and social life — and wake up to realize that some needs can’t be supplied by that world.

Winsome Sarah Donner of Cat Lady Records entertained with acoustic guitar. And by the way, the E in TED is supposed to be Entertainment, not Education, as you might think.

But the best part of it all was, of course, the people. The TED schedule allows for time to really get to know a few of the folks who have been hearing the same things you heard, and it allows for meaningful sharing. On one break, Janie Hermann held a trivia contest, each group had to name itself after a woman we admired. In our group, we all decided that we admired our mothers more than any other woman in the world, and so we called ourselves the Daring Daughters. Click here for photos of the groups. Led by Holly Landau, we had a hi-larious time and actually won the contest.

It was a real upper to meet one member of our group, Bethnolastname, for instance, to whom I gave the soubriquet: She Who is an Activist Beyond Her Means.

May we all use our means for the activation of good.