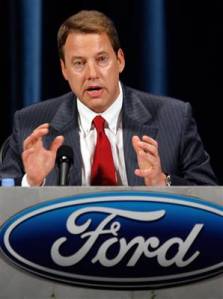 Bill Jr’s dad went to Yale, but his grandfather on his mother Martha’s side was a Princeton man, Harvey Samuel Firestone Jr. Yes, that Firestone, the tire company magnate with his name on the university library. So Bill chose Princeton, graduating in 1979, then earning an MBA from MIT’s Sloan.

All this is preface to the reminder that Ford returns to his tiger roots for a Keller Center lecture on Tuesday, February 15, at 4:30 p.m. at the Friend Center on Olden Avenue. (It’s a free event; anyone may attend, and there’s a reception afterward.) As the executive chairman of the company now run by CEO Alan Mullaly, he will be enthusiastic about Ford’s efforts to bring hybrid and electric-powered vehicles to market.

But if you manage to engage him in conversation in the reception afterward, here are other potential conversational gambits: fly fishing, tennis, the Detroit Lions (he is vice chairman of the team), eBay (he’s on the board), Tae Kwan Do (he’s a black belt), and the future of Detroit (he’s a city booster). You could also look in the audience for a younger version of Bill; I can’t confirm it but his freshman son Will may be in the audience. Often the Keller Center attracts parents of current students.

Another place to find father and son might be at the Hobie Baker rink. According to the New York Times, dad’s team is a champion in the over-50 pond league, and Will Ford just finished his first hockey season for the Tigers. Maybe dad will bring his skates.

Full disclosure: My family has always driven Ford cars and one of my children works there.