We’re just back from London, having taken our 14-year-old granddaughter on the Tauck “Castles and Kings” family tour. I want to tell about it, of course, but how to link that trip to Princeton?

“In central England, we have three and a half centuries of directly measured climate data,” writes David Kroodsma, a data journalist at Climate Central who helped synchronize the dates of all the royal weddings with all the temperature charts, as below:

Go to the original and you will get all kinds of fascinating click throughs, but Kroodsma points out that five of the ten hottest years in Britain have been in the past 10 years.

We certainly would agree with that. The week before the big wedding it was hot hot hot in London.

*The photo shows the Buckingham Palace gates with me, my spouse and our Michigan-based granddaughter.

*The ever-imaginative Jamie Saxon crafted a U.S. 1 Newspaper connection to The Wedding in this week’s cover story. Here’s the inside scoop on the cover shoot at Jasna Polana. Four brides got to recapture their magic moment for another day.

I thought I would be blase about The Wedding, but it was a thrill to see crowds march behind the police cordon to the very gates we’d been standing in front of, just 10 days before. 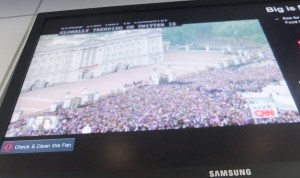 As for the trip, though jet-lagged, I’m still on Cloud Nine.