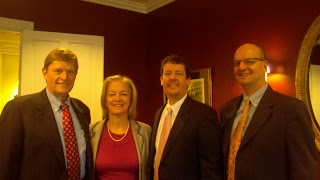 With Jet Blue (the employer of the now-famous Steven Slater) at the low end of the scale, and Campbell Soup’s CEO at the other, Kevin Kruse showed why it makes good business to help employees grow in the jobs, recognize them for what they do well, and create an atmosphere of trust.


This morning Kruse (third from right in this photo, also including, far left, Princeton Regional Chamber CEO Peter Crowley, Nell Haughton, and Tom Neilssen) spoke at the Nassau Club to a capacity audience of the Princeton Regional Chamber.  Neilssen, who is CEO of the Research Park-based Bright Sight Group, represents Kruse for his speaking dates. Those who attended went home with a free, signed copy of the book Kruse co-authored, “We: How to Increase Performance and Profits through Full Engagement.”


Slater is (was) the Jet Blue airline attendant who famously get fed up with his job and exited the aircraft on a slide. Doug Conant was the CEO who rescued the fortunes of the 150-year-old Camden-based soup company with a “soft approach,” paying attention to the hopes and dreams of the workers. (Conant had his own book published last year, Touch Points.)


Speaking without notes, with the humor and ease of the professional keynoter,  Kruse gave example after example of how G (grow) plus R (recognize) plus T (trust) equals business success. At one of his previous firms, Kenexa, he made it a point to have regular career chats (G for growth) with each employee about where they wanted to be in the next three years, and these contributed to his earning Best Workplace Awards. Beleaguered by Campbell Soup’s initial financial problems, Conant somehow found time to write 10 to 20 thank you notes every day, accomplishing the R for Recognize. Any company, whether in the black or in the red, should summarize its strategic plan as something memorable (Starwood’s mantra, for instance, is 1,500 hotels for 2014. That’s T for Trust).


When he recently addressed a prestigious military audience, Kruse picked up another piece of advice, this one from a respected colonel: “Everyone is not a leader! First you must learn to follow.” But, says Kruse, even though you are not the acknowledged leader, not the CEO nor the manager — you can use the G-R-T principles. says Kruse: We can all lead from where we are.”


Guess I’d better get back to my long list of unwritten thank you notes.

4 thoughts on “Writing Thank You Notes Does Pay Off”