Tonight in New Brunswick I saw the first of two performances of American Repertory Ballet’s ‘Celebration.’ I’m writing about it ‘with a hot needle and a burning thread’ as the saying goes, because I’m recommending that it’s well worth spending a Sunday afternoon indoors to see it. The second performance is Sunday, May 20, at 2 p.m. The company is dancing fabulously, the costumes (by Michelle Ferranti and others) are excellent, and the dancers communicate with all their corpuscles.

Company director Douglas Martin previews his full-length Prokofiev-based ‘Romeo & Juliet’ with the first act ballroom and balcony scenes. I was impressed. All the fine points of believable drama were there. Only the Montagues are masked, so we can easily tell who is who. Karen Leslie Moscato (pictured above, photo by Peter Cook) and David DuBois, as J & R, manage to fall in love before our very eyes yet evade the eyes of her parents. Each detail, each glance — especially in the dance where Romeo joins Juliet’s family — contributes to the tension. In Martin’s version, Juliet’s parents are a strong, calming influence on Juliet’s brother, Tybalt. Paris (Juliet’s intended) is a nice guy — not a nasty one, as in Nureyev’s version for Paris Opera Ballet. (Did I just name drop that I saw Nureyev’s version for Paris Opera Ballet last year. Mmm, yes. My excuse is that I liked Nureyev’s much better than the Macmillan one, especially for its interpretation of the plot, and I think I’m going to like this one too.) 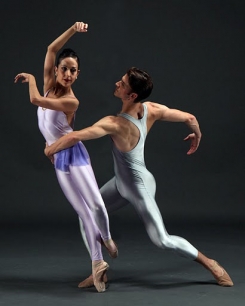 The two-hour program also includes Gerald Arpino’s 1970 Confetti (an Italian tarantella romp with tambourines), Patrick Corbin’s 2011 Follia (left, photos by George Jones), and Mary Barton’s new Straight Up with a Twist (below left, photo by Peter Cook). In this last piece, a showcase for the full company, the women’s unitards were trimmed with a fun ‘hip hanky,’ right for this flirty, quirky jazzy piece that might have been set in a New York singles bar. But along with all the dialogue — questions asked and questions answered — there was real dancing.

Throughout, the dancers communicated, with each other and the audience. For instance, Shaye Firer, in Confetti, had an especially conspiratorial eye; she let you in on her secrets. Stephen Campanella let you in on his joy.  These dancers knew, with each movement, what they wanted to say and they said it.

If you go, and I hope you do, be sure your GPS has the right address for the Victoria J. Mastrobuono Theatre, at 85 George Street, It’s part of the Rutgers Mason Gross Theatre complex, and traffic patterns off Route 18 have changed.
I’d like to say more, but Sunday morning calls…