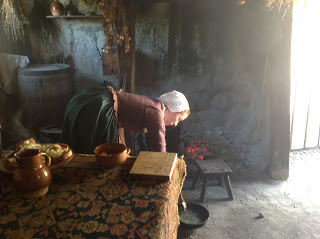 I’m not quite ready to for the challenges of being a woman in 1627 (as in this photo taken at Plimouth Plantation, the recreated Pilgrim village). But sometimes I resent having to cope with the techno challenges of 2012.

Take my iPad. Yes, I’m lucky to have it. I had no idea how wonderfully useful it would be. I bought it at Creative Computing (across from the Princeton Airport on 206). But I did not trek to Bridgewater (the closest real Apple store) to get the freely given advice and tutoring. I thought I’d be OK by just bumbling through, watching some how-to videos, and calling Apple Care (the subscription help desk) if I got stuck.

When a casual acquaintance clued me in that I had never learned to turn my new iPad3 completely OFF,  which was why my battery was always running down, I realized it was time to go to a class and tried to register for the $10 2-hour class at Princeton Senior Resource Center.

It was closed. Sold out. A month later, today there was an opening — and an eye opener. Thanks to Barbara Essig (in the red shirt) and Archana Swaminathan I learned lots of great stuff, like how to tell when my apps need upgrading and that it was time to switch to IOS6. (Have you switched yet?) Well, the new software sabotaged my email, fixable only after lengthy conversations with Apple Care. And my real software problem (my iPad won’t talk to my Windows XP) will never be solved.

Surely there are hundreds if not thousands of other iPad buyers — those who aren’t getting training in the workplace and aren’t paying for $40 classes in stores — who are bumbling along, asking friends for tips and never really conquering the knowledge gap. I tell myself — you’re not cooking over a wood fire, you are not subject to the whims of the weather — only  to the whims of incompatible software. Be thankful. Enjoy the photo (shown here) that your iPad can take. Take Essig’s next class. And keep on comparing notes and asking your friends for tips. Apparently “it takes a village” to survive the techno challenges of 2012.

(High marks for the re-enactors at Plimouth village. They impersonate real people, so they answer your questions as “Priscilla Alden” or “Mistress Brewster.” One leaves thankful to be living in our time.)

1 thought on “Does it Take a Village to use an iPad?”