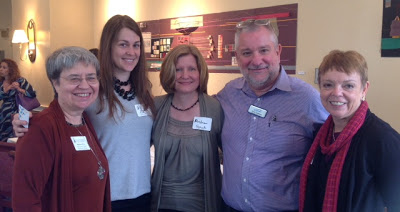 Why social media for nonprofits? This is Americaand this is fast, said David Yunghans of Constant Contact. He led a pretty fabulous morning workshop, sponsored by the Princeton Regional Chamber, at the Nassau Club on October 24. I attended along with four others from Princeton United Methodist Church, and I also took notes on behalf of Not in Our Town Princeton and United Front Against Riverblindness – as well as for my personal blog, Princeton Comment. The next session is Tuesday, November 20, and I highly recommend it. It costs $20 for chamber members, $25 for others.
Information is everywhere, Yunghans noted. People are using Facebook as a search engine. His first anecdote was about how one tweet “How about helping a charity that helps kids” resulted in a sponsored fundraiser netting $75,000. (It was his Tweet, and it helped the charity his wife runs.) He says he can reach 1 million people in 60 seconds.
The secret sauce of 21stcentury marketing: Selling never works.  Don’t ask for anything. Just report what is happening. Show people what you have done with their money. Tell them what you are going to do with their money. Always tell the truth. The new style of advertising: deliver a value statement, not a donate or buy me statement.
Be patient. People will not give money until they are ready. You may or may not get paid today, but you will get paid. Don’t give up on them (He told the story of the chef who unfriended him, because he never opened her emails, but he just happened to be ready to pay her $5,000 for a birthday trip for his wife. He could have found her but didn’t).
Reject the old marketing paradigm, the top down funnel, known as A.I.D.A. The new marketing – a reverse funnel – is a pyramid. Instead of trying to get the most possible clients, focus your time on the small group of people who already know you, love you, care about you, who will be heartbroken if you fail. Ask them to speak well of you. But you must ask. The difference between asking and not asking is huge. (Example, helping an author whose business was in the tank, and 18 months later, she is keynoting in Paris and has a 230,000 Twitter following. Now, if he asks a return favor, asking her to tweet something, he gains 25 new followers.)
People will not donate until they are ready. Don’t give up on them (story of the chef who unfriended him, because he never opened her emails, but he just happened to be ready to pay her $5,000 for a birthday trip for his wife. He could have found her but didn’t).
Show value. The economy has changed everything. What matters is the value you provide. Show photos of children being helped. Show what is happening to the money.
Here are some of his quick tips.
Save time: Clean up your inbox — use www.nutshellmail.comto organize and combine your comments, alerts, etc. on Facebook, Twitter, and LinkedIn. You can choose how often you want to look at them.
Learn how: www.socialquickstarter.com,  a free Constant Comment product, shows you how to do everything on the major social media platforms. His company’s motto, a good one for every organization, is “give away relevant information for free.” Says Yunghans, “People follow me because I find information and let other people know about it. I am building trust.”
Add followers. Start with one, build slowly and honestly. Think of Aunt Minnie, the town gossip on the party line. You want the Aunt Minnies to talk about you. With social media we can, as one person, talk to many people. (Yunghans suggests you don’t need to, and shouldn’t, share personal information on your organization account or even your personal account that you are using for business. I have heard differing opinions about this. Other experts say ‘it makes you real.’)
Keep checking your reputation with Socialmention.com. You can set the search to find anything said about you in the past 24 hours or in the past week or month. Among other measures, it measures sentiment and passion (more than one visit). Use a Boolean search (in quotes) for a more accurate search.
Overcome objections of a dinosaur board with statistics. The fastest growing segment on the Internet is people older than 55.  It is free. They have time. They want to put up photos of their grandchildren.
Tell the truth.People will verify it. On the web, 98 percent speak of you in a positive or neutral way. One percent are trolls, so ignore them, don’t engage. The other one percent may be telling the truth – a perfect time to engage. People believe yelp and trip advisor because real people are telling their version of the truth, and you have to sift through that.
Brand yourself on the Internet. Put logos on everything you send out – and don’t change the color. When people sign up they have to know and recognize your brand. Make sure your colors and logos are correct and they know who you are. Secure the vanity URL.
Use videos. They work if it is something fun.. When I checked socialmention.com for my church I found the most adorable video of a festival of children’s choirs, held in Princeton, and the kids are singing Dona Nobis Pacem. What a great video to use on our Facebook page. (Yes, I know there might be copyright problems but I betcha Dona Nobis is out of copyright!)
If you were at this workshop, chime in! Comment or tweet your favorite tip!
Pictured, from left — me, Sarah Harris, Andrea Spuck, Yunghans, and Iona Harding. Not shown, Lula Crawford).