Here is the link to the New Yorker cartoon. You might have to page through till you get to the one in the vet’s office, where the female vet tells a bespectacled man, “About your cat, I have good news and bad news.” The cat’s owner’s name, in the cartoon, is Mr. Schrodinger (with an umlaut, spelled Schroedinger in English).

I could see nothing funny about the drawing or the comment. Finally I realized that the name was unusual, maybe it meant something. I googled it, and found pages and pages about a quantum physicist named Schroedinger who theorized that a cat could be both dead and alive at the same time. (Now I know why I don’t want to study quantum physics, but here is a link to where someone tries to explain it).

Turns out everyone else knew about this man’s cat. It was referenced in TV shows like the Big Bang and Doctor Who, and lionized in a 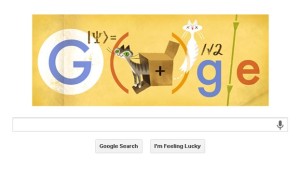 Google doodle. He even has his own Facebook page. This cat may even be featured  on the Top 20 list of Science Facts that English Majors Should Know.

Why do I bring it up on a blog that focuses on Princeton? The Einstein connection, a connection so important that it’s the subject of Einstein’s Dice and Schroedinger’s Cat, a forthcoming book by Paul Halpern, due out on April 15.

it’s all theoretical of course, or the SPCA would object.