See/hear Wim Sweldens, co-founder and CEO of Kiswe Mobile, which offers multiple-camera streaming of sporting events  for those watching games on their mobile devices. The talk, sponsored by the Keller Center, is on Thursday, November 6, at 4:45 in Princeton University’s Carl A. Fields Center on the corner of Olden and Prospect. Sweldens is the Belgian computer scientist who founded the Bell Labs skunkworks,  Alcatel-Lucent Ventures. He is now Entrepreneur of the Year at Columbia. It’s free. Topic: “Entrepreneurship and the Interplay with TV, Mobile, and Social.” 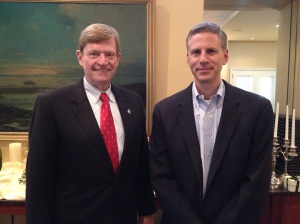 Being early is not too different from being wrong, said Jon Gertner, speaking to the Princeton Regional Chamber at the August breakfast. The author of The Idea Factory: Bell Labs and the Great Age of American Innovation (Penguin Press, March 2012) gave glimpses of the clashes and collaboration that led to innovation at Bell Labs, the consolidated R&D center built at Murray Hill when AT&T was the largest company in the world in terms of revenue, assets, and employees.  A former New York Times Magazine  writer (2004-2011) Gertner is currently editor-at-large at Fast Company magazine.

He illustrated the danger of being “early” with the enthralling story of vacuum tubes and transistors.  When the 101-D vacuum (or repeater) tubes (which enabled sound to be relayed from switch to switch across the country) was being hailed as “the great miracle device of our time,” Bell Labs CEO Kelly considered it an inherently flawed technology.  He was determined to find a technology based on silicone and germanium not susceptible to weardown and breakdown.

His mindset drove the “solid state” team to get rid of the relay switches and find an electronic solution: the first transistor in November, 1947. What happened next was that the transistor was basically abandoned by Bell:  It was costly to produce.  Only the US Military kept it alive until continued innovation led to lower cost.  At the same time, the press hailed solar, created to get electricity to remote areas.  Yet the fad for solar soon faded since there was no comparable drop in cost.

The “Being early” mantra was just one of the takeaways. Others:

As several members of the Chamber observed, substantial governmental subsidies at every stage, combined with the backdrop of 23 operating companies providing capital, made it possible for Bell Labs to fund basically anything.  Bell Labs had the freedom to concentrate not on quarterly profits and consumer goods but rather to focus on the foundations of our live.  They changed our world and our lives.