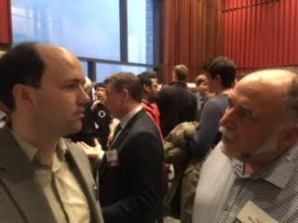 Techies play in a high stakes intramural tournament every February at one of the state’s best – free — networking opportunities. On February 15. at Princeton Innovation Forum  (PrincetonIF) the Andlinger Center for Energy and the Environment, they gave away $30,000 in one afternoon. All the teams were from Princeton University with Princeton profs as advisors or main participants. Sponsored by the Keller Center,  PrincetonIF focuses on commercializing technology developed at Princeton University.

Diccon Hyatt made it the cover story in this week’s issue of U.S. 1.  It reads best in hard copy, so grab one today from a newsbox before it gets replaced tomorrow. Or read it here.

With angels, venture capitalists, lawyers, and supporters watching, each team made a three-minute pitch. Then that power crowd emptied out into the crowded lobby, mobbed the wine bar, and the noise level rose as those-in-the-know and those-with-money interviewed the presenters and each other.

Read the story here to learn about exciting technology and get on the Keller Center’s mailing list here. Always something exciting going on at the Equad.

Thirty thousand grand will be on the line on Wednesday, February 15, at the Innovation Forum organized by Princeton University’s Keller Center. Participants present their research in a three-minute “elevator pitch” to the audience and a panel of judges. Simon Cowell’s got nothing on this show!

Register to come and watch the excitement.  You get to see inside the Andlinger Center and there’s networking and refreshments afterward.

A quick way to cure a hangover, a new medical imaging technique, an innovation in American Sign Language, a hackathon tool kit, a robot sous chef, and a fashion discovery engine  — some of the best and brightest Princeton undergraduates are launching exciting startups. List here.

They’ve been working all summer in the Keller Lab, and their Demo Day in Princeton is Tuesday, August 9, 2:30 p.m. at the Friend Center. You need to register!

I can’t attend. If anyone who reads this can go, and wants to write it up for this blog, I’d welcome that. If you don’t have my email, put in the comments that you’d be willing to be a guest blogger.

See/hear Wim Sweldens, co-founder and CEO of Kiswe Mobile, which offers multiple-camera streaming of sporting events  for those watching games on their mobile devices. The talk, sponsored by the Keller Center, is on Thursday, November 6, at 4:45 in Princeton University’s Carl A. Fields Center on the corner of Olden and Prospect. Sweldens is the Belgian computer scientist who founded the Bell Labs skunkworks,  Alcatel-Lucent Ventures. He is now Entrepreneur of the Year at Columbia. It’s free. Topic: “Entrepreneurship and the Interplay with TV, Mobile, and Social.”

A Big OOPS. I got the date wrong on the demo for the Keller Lab, as below. I said it was Wednesday in Princeton, but it was Monday. I missed it too. The New York version starts today (Tuesday, August 12) at 5 p.m., details here.

It is fun to read about the different companies and their technologies.

Original post below, edited to take out the wrong date.

Universal Display was the brain child of a Princeton University faculty member (see story on Julie Brown). This summer the Keller Lab at the university is also hatching tech startups from students at what is known as the ‘e-Lab.” U.S. 1 has a story about one of the startups, Solstice Intitiative. Another is Space Touch (video demo here).  Here was the program.

From little acorns: Teams of Princeton University students are working at the Keller Center this summer to churn out tech startups. On Monday, August 11, they showcase them in an always popular event. For information on how to register, click here.

One such startup — not from a student, but from a professor, was Universal Display. Former Princeton professor Steve Forrest had some bright ideas about bright displays using OLED (Organic Light Emitting Display) technology, and his three-person startup is now 100 plus. His sidekick, CTO Julie Brown, speaks at the Princeton Regional Chamber just as these students finish their project. Her talk: Thursday, August 7, at the Forrestal Marriott.

I’ve registered for both events.

A startup is not a company? No, says David Teten, Partner at ff Venture Capital; Founder and Chairman, Harvard Business School Alumni Angels of Greater New York. He speaks Thursday, November 14, at 4:30 p.m. at the Friend Center Convocation Room (113) for the Keller Center.

He will address the importance of market research in starting a business, identifying proper audiences for your product, and ways to reach out to particular people. After conducting research on best practices for deal origination, David found that venture capitalists only invest in one out of every one hundred startups that present pitches to them. Entrepreneurs should be nimble, listening to the market and acting according to the data they collect. A startup is not a company; rather, it is a group of people in search of a business model on which they can build a company.