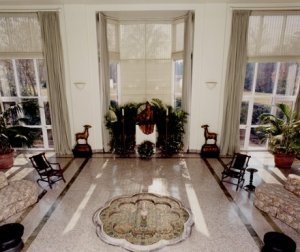 It’s not the saddest thing that has happened to the legacy of Doris Duke. That dishonor belongs to the tell-all books and movies. But it’s still sad that the contents of her Hillsborough home, “Duke Farm,” suddenly are up on the auction block, and not even at Sotheby’s. Both the art and the domestic items will be on sale in Morristown on Friday, May 1.

I had two pangs of sadness when I saw it. I’ve written about her for U.S. 1, and have visited two of her three houses — in Hillsborough and Hawaii. I’m not sure I agree with the trustees’ decision to close the one in Hillsborough and devote it to outdoor education. More on that later.

The other pang was because I learned about it today in the pages of U.S. 1 Newspaper, where I worked for 22 years. If I had been in the office, I would have seen the press release and the photo of Doris’s bedroom come in.

But I rejoice that the savvy folks there spotted it and were able to run the picture that caught my eye. And that I had time to page through today’s edition and see it. So maybe I can change my plans and get there, just for curiosity.

It’s ironic that I am torn between the Duke auction and an all-day seminar on the potential demise of newspapers, both on the same day. I had not heard of either event until I found them, today, by reading U.S. 1 Newspaper.

5 thoughts on “So what happens to her house?”