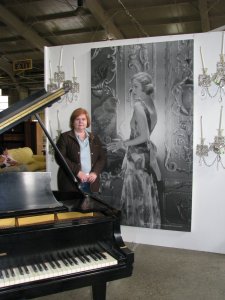 Not to be maudlin about it, but it was certainly sad when Doris Duke’s possessions, which I’d seen at Duke Farms, showed up sitting forlornly on tables at the Morristown Armory. Today was the first day of a two-day auction of the less valuable of Doris’s things. Now I know why my father-in-law didn’t want an auction.

There was her history, the facets of her complicated personality, from exquisite Asian art to bawdy cocktail glasses, from the gold penknife with the initials of the father she dearly loved (you can imagine her treasuring it in her drawer – didn’t some family member want this???) to an outdoor statue of a deer. From the oh-so-comfortable red chairs in her Theater room to four dilapidated cars.

Catalog prices were way low, perhaps to attract amateurs like me, and the bidding was sky high, partly because of the provenance. I tried my hand at a bid, choosing a huge Japanese drum that I could hardly lift, because I imagined Martha Graham beating on it as she gave dance lessons to Doris. Bidding started at 100, I got out at 400, and it sold for $11,500. That was the way it had gone all day, said a Chinese collector. At any other auction, he said, less than perfect pieces would go for low prices or unsold. There aren’t any bargains today, he said.

Most of what I covet goes on sale tomorrow, whereas today was Asian art and books. The Chinese collector said that, for the big New York auction, buyers came in from Asia, but today they were bidding on the Web and by phone, making preemptive bids and leapfrogging like crazy.

Nosing around, I talked to one of every kind: the elderly gentleman who had served on a trustee board with Doris duke at the community college, the African American couple and their young daughter who collect Lalique and Steuben, the former postman who is enamored with leather-bound books, the fashionable matron on an outing from New York, and, yes, the people who just liked Doris Duke and what she had stood for in the community.

“I don’t know what they were thinking,” said the woman who lives in Hillsborough (pictured here). “It just doesn’t seem right that after all the wonderful things she did, that Miss Duke’s possessions should end up in the Morristown Armory.”

More stories should go with this, and perhaps I’ll have time, but meanwhile here is the link to the photos I took today. It’s worth going on Sunday, if only as a reminder that no matter how rich you are, you can’t take it with you, and all you really leave behind is your reputation.