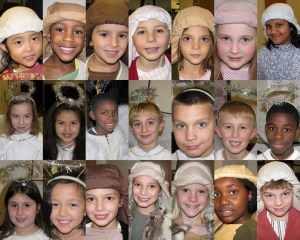 Ever since 1980, when I saw Bhutanese monks incorporate slapstick with their religious dances, I’ve been interested in how comedy can impart spiritual values. They knew that in the Middle Ages, when stained glass windows served as Biblical texts for illiterate peasants, and when actor/dancers told Bible stories by staging “mystery plays” in front of the cathedrals.

A Princeton University senior, Phoenix Gonzalez, had that same fascination. For her senior thesis she presents Wakefield Mystery Plays at the University chapel on Friday, January 7, at 8 p.m., and Saturday, January 8, at 3 p.m. The play begins outside the chapel, so dress warmly. It’s free, no tickets needed.

Says Gonzalez: “The goal of this project is to capture some of the medieval aspects of the plays, while also exploring elements of modern life, and in so doing, to probe important questions such as: What is the role of the community as audience and creator in this type of theater? How can religious theater be understood today?”

This could be a wonderful family activity on Saturday afternoon. Actors will be speaking in stanzas but one of the two plays, The Second Shepherd’s Play, opens with buffoonery, involving a thief who steals a sheep and tries to pretend it is his son. When he is discovered, the shepherds punish him by tossing him on a blanket – and then set forth to visit the Christ Child.

Time travel to the early 15th century — and get back in time for dinner.