Elizabeth Bogan, senior lecturer at Princeton University (shown here with Jim Solloway) addressed the West Windsor Republicans on September 12 with a non-partisan discussion on the economy. She considers herself a market oriented economist, taking the middle ground between the Krugmans and the tea partiers. Her charts were, of course, predictably discouraging, but she had some unpredictable insights on why that’s true.
DISABILITY: For 42.7 million to be on disability is way too many, in her view (and, in today’s news, Congress’s view). People who could be working, aren’t. 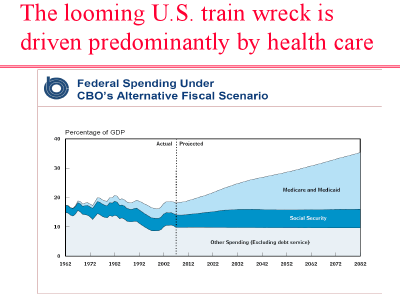 HEALTHCARE. In Medicare — elders are getting $3 of care for every $1 they paid in, and that is unsustainable, she says. We must attack the myth that everyone has the best of care.” We don’t all drive the same cars, we don’t all have the same food budget, maybe we don’t all get equal care, after all.

Ryan’s plan is not soon enough or not radical enough, she says, but it does set limits on what you are going to spend. “There is no tooth fairy.” She doesn’t think that a Romney/Ryan administration would actually eliminate Obamacare. “But they do understand efficiency.”

Of her strategies below,  # 3 (better use of computers) is my fave, since I’m all for efficient digital health records and personal health records. (Whatever happened to that company, birthed in Princeton, that would put your health record, your insurance, and your bank account all on the same card? Now that would be efficient.)  I also like #4, change the rules, because it would let my doctor get paid for emailing me.

BEYOND HEALTHCARE: Because we had two wars without raising taxes (nonsense! says Bogan), we are addicted to public and private debt that is being picked up by the Chinese. When China turned to a capitalistic-style economy (eating our lunch with manufacturing jobs), the world’s labor force increased exponentially. In this country, the lawyers, accountants and consultants are doing well, but jobs disappeared for the lesser educated, who must now focus on personal service jobs.
One strategy, says Bogan, is to quit giving the day traders a free ride. Tax each and every financial transaction at a rate of 1/10th of 1 percent. Every stock sale. Every mutual fund buy. It would have a minimal effect on most of us, but it would hit the nano-second traders right where it should.
Raise the retirement age to align with today’s life expectancies. Raise it to 67 (for the early stage) and 70 (for the final stage).
Tax the returns to hedge fund managers as ordinary income instead of as a capital gain (and this, from the spouse of a hedge fund manager.)
Tighten leverage rules to require 10 percent down on anything — houses, appliances, anything.
And what about taxes? Surveys show, she says, that folks from all income levels think that 25 percent is about right. Clinton got it right. He reduced the number of brackets. “We don’t have room to make huge tax cuts now,” she says. “The Obama rhetoric confuses business. If we grow the economy, fewer people would choose food stamps and welfare. I am comfortable with debt if I believe it will solve long-term problems.”
`