For today’s Princeton Chamber breakfast with Netherlands native Robbert Dijkgraaf, director of the Institute for Advanced Study, I brought three guests, including two who spoke Dutch. (See below for why)

If you didn’t get to read Michele Alperin’s excellent cover story on Dijkgraaf in U.S. 1, here’s a link. At the breakfast, he reiterated the Institute’s focus on basic research, but I picked up these extra tidbits.

Speaking of Oppenheimer we will all have a chance to hear a Nobel prize winner who worked with Oppenheimer at the Albert Einstein Memorial lecture today. Roy Glauber, who was the youngest mathemetician at Los Alamos and is now 82 year old, speaks at the Woodrow Wilson School, Wednesday, March 20, 5:30 to 6:30 p.m. Register to be sure there is a seat for you. It is FREE. Parking is available in university lots after 5 p.m. See you there!

Why do the Dutch have a special place in my heart? When I was 14 years old, I made a pen pal friend from Utrecht who — by a wonderful confluence of circumstances — lives just an hour away. So I love to hear folks speak English with a Dutch accent. Captions: 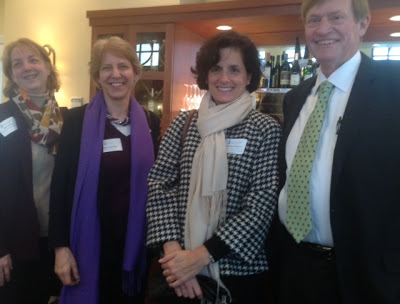 At the top on the left, Karen Brouwer-Franck is a member of my church who teaches a Moving On after Moving In workshop for women in transition, I’m on the right. Second photo, far left, my neighbor Kate Newell has Dutch ancestry. She is the new “ghost tour” guide at Princeton Tour Company  Next to her is Karen L. Johnson, an independent CPA who also goes to my church, and Elizabeth Mayer Muoio, director of the Mercer County Office of Economic Development and Sustainability, and — of course — Peter Crowley, CEO of the chamber. Third photo: Catherine Judd Hirsch (Music Together), Rick Ober (Isles Inc.), and Johnson.

1 thought on “The Future of the World — in Fuld Hall”