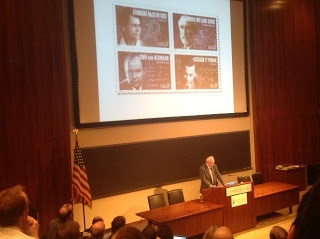 On Wednesday morning I heard Robbert Dijkgraaf speak about how the great minds of the Institute for Advanced Study did their research. That very afternoon, for the chamber’s Albert Einstein lecture, Nobel Prize winner Roy Glauber — who had been a visiting physics scholar at the Institute — told of the professional camaraderie of such great figures as J. Robert Oppenheimer and Edward Witten. Glauber was just 19 when the federal government sent him out to Los Alamos, where Oppenheimer was supervising the making of the atom bomb. (He hastened to say that the scientists had no say in how it was used.)

I took notes but don’t have time to write them. Fortunately, the Packet’s Philip Sean Curran did the job, as here.

Glauber was engaging and entertaining as he spun his tales. And here are a couple of his pix.

In the first, Glauber wryly comments that it’s a privilege to know someone whose face is on a postage stamp. Of the Los Alamos crowd, John von Neumann and Richard Feyman gained the approval of USPS.

But Glauber says it was Robert Oppenheimer (next photo, looking dapper in an always-worn fedora and cigarette) who was really the point person on the project. Glauber believes that — without Oppenheimer — nobody else would have stayed. But his reputation was tarnished by Edward Teller, who wanted to pursue a different course of research. I suppose von Neumann was the one who emerged with his image intact. I’m going to put the book Glauber recommended, The American Prometheus; the Triumph and Tragedy of J.Robert Oppenheimer on my next-to-read list.

After the lecture I combed through the Institute for Advanced Study brochures showing scholars’ faces, names, and research topics, marveling at the diversity of topics, a bit saddened at the lack of diversity among senior faculty, but heartened by the rich diversity among the younger scholars. Who will be the next von Neumann?