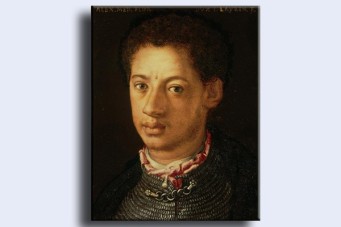 That someone in the Medici family had African heritage may come as a surprise, but that’s what we learn in Revealing Presence in Renaissance Europe, on view through Sunday at the Princeton University Art Museum. When Alessandro de Medici, the out-of-wedlock son of Pope Clement VII and an African maid in the Medici household., became the Duke of Florence, there were no full-face portraits of him. Contemporary portraits showed him with a hood. After his death the portrait was painted that hangs on banners all over campus to promote the exhibit. Look here for an intriguing art history puzzle, about the picture next to it. The label on the picture reveals the sad fact that Alessandro was no popular favorite, “tyrannical,” is the word they use.

It’s definitely worth trying to get there before this exhibit closes on June 9. And it makes an intriguing juxtaposition to the four walls of shoulder to shoulder portraits of Old White Powerful Men, the former portrait collection of the New York Chamber of Commerce.  J. Pierpont Morgan, William H. Vanderbilt,  Grover Cleveland — these portraits are fascinating because the  personality of each man shows through.

This exhibit has a different title from the one I used, but the bottom line is — that when the need for diversity came along, i.e. the idea  that women and people of other races might possibly be admitted to the great halls of business, the paintings needed to go. As the New York Times review says, “old white men did not fit in with the chamber’s commitment to diversity. ” They are now owned by Credit Suisse and on view in Princeton through June 30.

If you think that in 2013 nobody makes politically incorrect comments about race, or gender, think again. Today in the racing column of the New York Times, in a discussion of a filly that will run in the belmont, a veterinarian was quoted as saying, “It takes a special filly, one that is willing to stare down the boys and say, ‘No this one is mine.’  It’s so much about personalities and intimidation when these horses match up. I think it’s the same reason women don’t have as much, and the same kind of success, as men in the workplace.”

I would be more outraged, except that the person quoted was a woman.