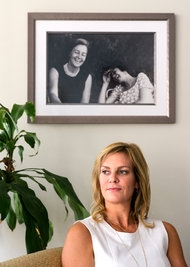 The National Public Radio Morning Edition story on how the Amazon founder bought the Washington Post, fails to mention that Jeff Bezos is a Princeton alumnus, Class of 1986. He delivered the Class Day address in 2010.

The Washington Post story adds that detail to the Bezos biography. The New York Times sidebar implies it, saying “After Princeton”

Might it seem like a lucky coincidence that the New York Times just happened to print a big piece on the Post editor, Katharine Weymouth, on the day before? The reporter defended it, saying that she had been assigned the story a while ago but “didn’t get around to it” till July.  I believe her. (Memo to self and other reporters: Don’t Drag Your Feet on the Good Story.) But it certainly was nice for Weymouth to get her spot in the sun before the storm broke.

And in the Snarky Section, that article drew darts for announcing what Weymouth wore to get her photo taken, and that she was able to wear a sleeveless dress thanks to her workout schedule. I say, Good for her! And I would want to know those details.

Photo of Katharine Weymouth by Matt Roth for NYTimes