Maria Klawe was named dean of engineering at Princeton University — soon after Princeton had its first female president.  Unafraid to be ‘different‘ (she doodled and knitted at faculty meetings), she left after three years to be president at Harvey Mudd and to raise a feminist ruckus when appropriate.

Now, as reported in the New York Times today, she contends that because she (typical woman?) did not negotiate her salary, she was paid $50k less than she should have been. Wow.

The article “Microsoft Chief Sets of a Furor on Women’s Pay” is on the controversial statement by Satya Nadella that women “who do not ask for more money … would be rewarded in the long run when their god work was recognized.” His mea culpa refers to some other HR axioms that you may or may not agree with.

Meanwhile, if you want to see what this woman looks like, just go to the Friend Center, to the big room with the portraits of the deans, painted in oils by distinguished artists. All except one. Klawe’s is a watercolor, and it is a self portrait. Below. 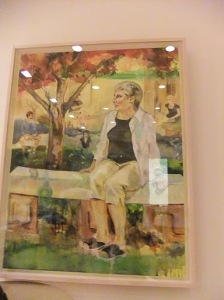