For this post I asked my husband, George Fox, to read “Alan Turing: The Enigma” by Andrew Hodges and write about Turing’s Princeton connections. Princeton University Press had sent the book, issued at the same time as the The Imitation Game movie now playing at the Garden Theatre, but I didn’t have time to plow through all 768 pages. Like many engineers and programmers, George is a Turing admirer, and he obliged. As here:

In 1935 at age 22 Alan Turing was the first of his year group to be elected a Fellow at Cambridge and receive a fellowship which paid 300 pounds a year for three years. His focus area was mathematics and his first paper was a small improvement to a paper by John von Neumann.

John von Neumann happened to be spending a summer away from Princeton and gave a lecture course at Cambridge on the subject of ‘almost periodic functions’ – which provided Alan an opportunity to meet him.

Turing decided to apply for a visiting Fellowship at Princeton for the following year – 1936.

He did not receive the Princeton Fellowship but left for Princeton in September 1935 – spending 1936 and ’37 at Princeton.

The next year he was awarded the prestigious Procter Fellowship at Princeton. William Cooper Procter (of Procter and Gamble) was Princeton Class of 1883 and a significant benefactor to Princeton and to the Graduate College.  (The term Ivory Tower originates in the Song of Solomon but the Graduate Tower at Princeton is sometimes jokingly referred to as the Ivory Tower – a reference to William Procter.)

The birth of the modern computer

In the meantime (1935) Turing continued at Cambridge. He was a long distance runner and one day while running he had an inspiration to approach the mathematical problem of “provability of any mathematical assertion presented”.

Turing’s approach to the problem was published in 1936 in a paper titled “Computable Numbers.”

He had to abstract the quality of being determined and apply it to the manipulation of symbols.

His inspiration was to envision a machine which at any time would be one of a finite number of possible states with an exact determined behavior in each state. His inspiration was based on the typewriter which he had seen his mother using when he was a child.

He imagined the input to his machine as being a form of tape marked off into unit squares such that just one symbol could be written on any one square. Thus his theoretical machine was finitely defined but allowed an unlimited amount of space on which to work. The theoretical machine would scan a single square and could read, write and erase the symbol on the square but could only move one square to the left or right at a time.

The entire process could be done without human intervention.

All the information associated with a given machine could be written out as a table which completely defined the machine. There could be an infinite number of unique machines – each associated with only a single table.

Each table could be identified with a corresponding number. From this followed the idea of a universal machine which when presented with a given table could do the unique function associated with the table.

. In Computable Numbers Turing used binary numbers – which make it possible to represent all of the computable numbers as infinite sequences of 0’s and 1’s.

Turing began to think of Turing machines as comprised of combinations of electromagnetic relay switches. Off or on, 0 or 1, true or false. Thus the logical processes of Boolean algebra and binary arithmetic could be implemented in a physical process.

Alan Turing received his PhD from Princeton in June, 1938.

In 1937 while Turing was working on his PhD thesis at Princeton he became interested in cryptanalysis.

By 1937 Turing could see the growing tension with Germany and the value of code breaking.

The Enigma machine was an electro-mechanical rotor cipher machine invented by a German engineer at the end of World War I and was used for enciphering and deciphering secret messages.

Three Polish cryptologists are credited with reverse engineering the Enigma machine in 1932.

In 1939 British and French Intelligence were briefed on the Polish work with Enigma and were promised a Polish reconstructed Enigma. This machine became a vital basis for British continuation of the code breaking effort.

Alan Turing and his Universal Machine soon became deeply involved in British Intelligence and the continuing work in code breaking the Enigma.

The story of Turing’s work in breaking the German code is told in the movie “The Imitation Game.”

Something I did NOT expect: The Garden Theatre presents a LIVE dance-theater performance by DV8 Physical Theatre on Wednesday, January 14, at 7:30 p.m., repeating Sunday, January 25, 12:30 p.m. This National Theatre production is billed as for adults, read about it here.

Current films at the Garden are Selma, which I saw in company with some youthful demonstrators at another theater on Saturday . Loved the script and the acting, and (though I am squeamish about it) the onscreen violence was handled well. 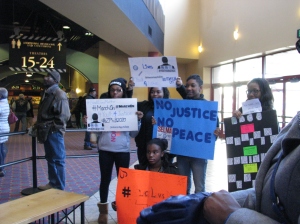 Also the movie about Alan Turing.  Thanks to Princeton University Press who sent the Very Big Book that inspires the film. Spouse is plowing through it, likes it, and promises to provide a mini-review. Turing was surely a hero to my late cousin Ann.