If you don’t subscribe to the Times of Trenton or the Star Ledger or the Bergen Record or any other newspaper that still has a reporter covering the statehouse, do it now. If you aren’t a member of WHYY, with its newsroom at Newsworks, join now. Support Politico’s New Jersey desk. If you can find an independent online investigative reporter in your community, like Planet Princeton, contribute or advertise.

You can march, you can write letters to the editor, you can call your legislators, but you can also help protect our democracy by bolstering the budgets of the investigative reporters trying to combat fraud and lies.

I knew this before but this Wednesday New York Times column italicized my impulse.  David W. Chen, who wrote “In New Jersey, Only a Few Media Watchdogs are Left,” used to be bureau chief for the statehouse desk for the New York Times.

The New York Times no longer has a staff reporter covering New Jersey. The number of reporters at the state house has dwindled from 30 to 7.

McCarter Theatre has it right. McCarter is running ads on Politico’s media page

Poignant detail #1: The print version of Chen’s article showed two lonely news boxes in downtown Trenton. One was for the Star Ledger, which has coopted the Trenton Times state coverage. The other was for U.S. 1 Newspaper. What?? U.S. 1 covers state politics once in a while, as in this investigative piece,. We cover important issues and the boss sometimes opines in his column, but statehouse reporting — that’s not our mission.

Poignant detail #2: Chen’s ender was a salute to the 87-year-old columnist who uses a typewriter.  A colleague converts with the typed page to a PDF, using her cell phone, and emails it in.

I just registered for the WIBA program featuring Anne Marie Slaughter for (as I write on Monday) for Tuesday, April 12, 5 p.m.. Finally broke down and did it, wasn’t going to (my favorite choreographer Mark Morris is at McCarter that night) but I will just have to leave Greenacres Country Club early. Wasn’t going to go because I have mixed feelings about Slaughter’s opinions on why women can’t have it all as blurted out in the notorious article in The Atlantic.

Of course women can’t have it all. We pre-Gloria Steinem brides knew that all along. 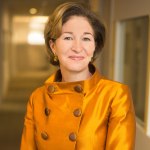 So I’m hoping this former Princeton professor turned media guru will enlighten me on her current views about women. (Will she also weigh in, as a former Woodrow Wilson School dean, on the Wilson/name controversy?) . I will have to  leave early to see Mark Morris Dance, but at least I’ll take home a copy of Unfinished Business,  her new book based on the article that caused so much commotion.

As for Morris — Virtually all of Morris’s choreography is to live music, including Whelm to Debussy and The,  a four-hand arrangement of Bach’s first Brandenburg concerto. (There will be one piece to recorded music; the songs of Ivor Cutler. Complete program here.)   I firmly believe the commotion surrounding the excellence about Mark Morris is well deserved.

When David Sedaris launched his annual speaking tour tonight, standing room only at McCarter (Wednesday), the line for book signing snaked around corners. Asked about the election, his off-the-cuff answer about Trump, paraphrased:

“It’s as if he looked at who wasn’t being pandered to — the stupidest people in America weren’t being pandered to.” Sedaris said, pointing out that at least Trump gives plain answers rather than politician-runaround. “I think he dominated the news so long that people were tired of him.”

Patrick Murray will opine on the same subject on Thursday, April 7 at the Princeton Regional Chamber. To find out what folks are really thinking about politicians like Trump, says Murray, eavesdrop in a diner. Murray is quoted  in  Michele Alperin’s U.S. 1 cover story here. Murray heads the Monmouth University Polling Institute, which is still in the game of political prognosticating, an arena in which — surprisingly — Gallup has left. Here is why.

For this occasion, Sedaris wore culottes. What would Trump say?

Susannah Hoffman unfolds before your eyes from child to woman, onstage at McCarter in Baby Doll, by Tennessee Williams in the Emily Mann version. At the dress rehearsal the mesmerizing happened ‘between the lines.’

In this article, you can see the trailer to the original film, starring Carroll Baker and Eli Wallach.

As Bruce Chadwick’s blog review describes, There is a scene in the play when baby doll, barefoot and in her slip, walks up the stairs, back to the audience very slowly, body shifting to the right, the left, the right, the left, her bottom slowly undulating. I was amazed that the Princeton fire department was not called to put out the blaze from the heat Hoffman generated as she slithered up those stairs.

Writers who see the dress rehearsal aren’t supposed to review a play, but Chadwick’s review — comparing Hoffman to Carroll Baker — did it for me, in more ways than one

Emily Mann, celebrating her 25th year as artistic director of McCarter Theatre, regaled an enthusiastic lunch audience at the Princeton Regional Chamber of Commerce last week with the toils and tales of creative endeavors. In her case, it was her production of Shakespeare’s Antony & Cleopatra — how  her collaborators — scenic, costume, music, choreography — combined their ideas to come up with an experience that the New York Times reviewer labeled “beautifully bold.”

Revealing the secret of the very sensual movement sequence that opens the play, with Nicole Ari Parker and Esau Pritchett having a tumble under the sheets, except there are no sheets, she said it was choreographer Peter Pucci’s idea to have the actors (each happily married) go through the indoctrination for new dancers that Pilobolus uses.   Pilobolus dancers are required to grasp each other in places where you aren’t supposed to grasp, so to start them off they must do an exercise where they touch — with the top of their heads — every part of the other person’s body. Makes sense, because skull skin doesn’t many nerves. The result was that Parker represented, as one reviewer said, the embodiment of physical love and desire.

During the Q&A she talked about how she is doing a documentary play on Gloria Steinem, and how she got started doing social justice documentaries or “theatre of testimony”. She was born to to the cloth, to mix religion metaphors.  Her father was an eminent professor of American history at the University  of Chicago, and the late John Hope Franklin,a  pioneer in African American history,   was his best friend.

Mann had such a compelling voice and podium presence that I was wishing I could see her on stage as an actress.

My photo shows Emily Mann, left, with Melissa Tenzer, founder and CEO of CareersUSA Princeton and president of the Princeton Regional Chamber of Commerce Foundation,  which awarded $35,000 to four nonprofits that day.